Clicking on many of the pictures enlarges them and provides extra information. The models are usually attributed to the builder.

The Guild is always interested in preventing good Meccano going to waste. If you have any Meccano to re-cycle, please contact the Secretary or a member at one of our events.

Click  “Exhibitions” for a calendar of our events. Or “Event Details” for information about individual ones.

Click “North West” for information about Meccano on display and  Meccano related locations in the North West of England.

This was the first time that we have exhibited at the museum and about 10 members exhibited and also a non-member, John Hornsby provided a wide selection of models. In addition to the models in the photographs, we had the Blocksetting Crane featured on the covers of many manuals, a fine Fork Lift Truck and a  sophisticated  Meccanograph. We had many interested visitors, perhaps a couple of hundred each day.

Chris. Harris has produced a video for U-Tube:

John Hornsby took  photographs  on Sunday and put them in his nzmeccano.com user gallery. They can be found starting with:

20 Hot-pots were consumed, slightly fewer than usual. However, this did not prevent a large number of models  appearing, so that they overflowed from the usual area. Booking for tables at our coming events (see the Exhibitions page) were collected and excellent displays are expected at our major events.

Only a few pictures are available at present. They can be seen in the Webmaster’s nzmeccano user gallery starting at:

Three members exhibited at the museum as well as the museum’s organiser, George  Barrett. Models included a Kangaroo crane, the Stiff-Leg Steam Powered Derrick Crane for which instructions were supposed to be published but were not, until much later, a furnace charging machine, and a host of smaller models.  Many interested members of the public attended.

The main engine and the beam engine were working and it was possible to view the partially erected but unrestored Fern Engine. Although it would be lovely to see it in operation, in its present state it is possible examine details of its construction not visible in a working engine. In fact, it complements the very similar main engine. 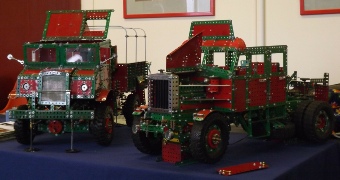 Ten Members exhibited at the Museum. Some of the models are shown are the pictures above.

Attendance was quite good on both days helped by better publicity by the museum and the local press. A table full of Plastic Meccano models was constructed on both days, some very innovative. Unfortunately, the photographer missed them.

Organised by the Clwyd Veteran and Vintage Machinery Society Ltd.

Only two members were able to attend, but with the aid of a former member put on an impressive display on 7 tables.

In addition to those shown in the picture, there was the SM 19 Steam Shovel, a highly detailed lorry chassis, climbing penguins, a synchronous clock  and several others from many periods of  Meccano history.

Although the weather was good, many models were made from the original version of Plastic Meccano (eligible under the society rules) at the Hands-On Workshop.

Only two members attended this event, but two other exhibitors came with Meccano displays. The electricity supply was much improved by Mark’s suggestions and so the whole marquee did not have to be supplied by the guild’s extension leads. In spite of rain on Saturday, there was a good attendance of interested visitors. The pictures show Mark’s Timber Truck and Dick’s Märklin Steam Freighter model 103 from Manual  No. 14 931 made mainly from Metallus parts and modified, partly to avoid serious mutilation of some parts. 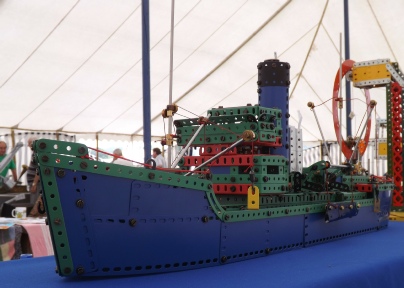